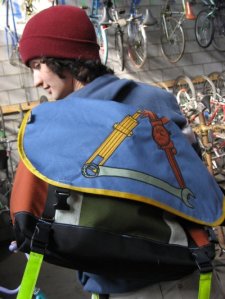 The embroidery on the bag was done by a talented friend, Jake Kilburg, while he spent a summer in Philadelphia working at Reload.  It’s my design, a triangle formed from a slide rule, a dial caliper, and a combination wrench: a nod to the sense-plan-act loop at the heart of early robotics research.  I’d built the bike racks in the background, and possibly a few of the bikes hanging on them, during my time working with Free Ride, a community and consensus based bike program.

These were good years, and busy years, and I want to use this post to briefly document a few projects I worked on during this period, between 2004 and 2010, roughly from the beginning of my Ph.D research until the time I founded WhisperSystems.

Shortly before starting graduate work at the Robotics Institute, I’d put together my first gallery installation with the inimitable Chris Smoak for a student exhibit showcasing technology based work.  We convinced Simone Jones, a visiting professor at Carnegie Mellon, to advise the project, borrowed an equiangular mirror from some researchers at the Robotics Institute, wrote a grant proposal to the school’s SURG program, and I set about spending my entire spring break building a large steel periaktoi frame covered in tailor’s silk.  I made several questionable design choices, using heavy angle iron secured with small cap screws for the frames – making assembly and transport quite time consuming.

The mirror hung precariously from steel cable in the center of the periaktoi, and an upwards facing projector we’d talked the EE department’s equipment room into loaning us reflected off the mirror and covered the interior of the silk prism in light.  I wrote a hardware accelerated OpenGL tool to correct for the distortion from the mirror, letting us treat the entire surface of the twelve foot prism as a projection mapped surface.  We set up cameras to watch each face of the prism and detect moving silhouettes as visitors walked by, then draped a huge blue tarp over the entire ceiling of the warehouse partition we’d set up in, creating a diffusely lit cave.  If memory serves, I believe I insisted we call the environment ‘womb-like’.

The idea was to create a ‘virtual ecology’ that lived on the projected surface.  We created simple worm-like simulations rendered as black metaballs on a white background.  They circled endlessly searching for food.  Passing silhouettes had little effect, unless visitors on opposite sides of the periaktoi, invisible to each other, moved synchronously.  Then, the worms would join the circling humans, matching their pace around the prism.  There’s always been magic in a good circle pit.

I’d been working with Reid Simmons at the Robotics Institute as a research assistant, developing an OpenInventor based simulator for multi-robot coordination on future Mars missions.  Based on that work, he agreed to advise an undergraduate thesis in related work.  I’d been interested in applying Bayesian methods, in particular particle filters, which were hot stuff in the simultaneous localization and mapping (SLAM!) world at the time, to manipulation tasks.  I’d just discovered Matt Mason’s work on sensorless manipulation, and wanted to do something that had a similar elegance.

The thesis work addressed the problem of how a robot might learn to manipulate a rigid object that it initially knew nothing about.  My ‘minimal’ formulation of the problem allowed the robot to poke at the object with a rigid, finely pointed manipulator (think a long, thin rod) and observe only the motion and orientation of a single point on the object’s surface.  It wouldn’t know the shape of the object, how much it weighed, how rough or smooth different parts of its surface were, or how its weight was distributed throughout the object.

It turns out you can learn all these properties by watching the object move in response to different pokes and prods.  Each time the object slides, or flips, or bounces, or comes to rest, or spins in the air after being tossed, you can narrow down what potential combinations of weight and shape it could have.  The trick is to efficiently represent all these possibilities in a way that they can be quickly computed, and then figure out what pokes and prods are most likely to teach you something useful about the object.

In the thesis document, I developed a few useful insights into this problem, like an efficient way to sample points in the ‘space of possible objects’ so that the likelihood of points inside the envelope of the sampled points was a simple linear interpolation of the likelihood of the surface points, but never really got the whole system working the way I’d imagined it could.

Still, the aesthetic of this work, modeling minimalist problems with efficient models and a focus on the details of rigid body mechanics, would continue into my doctoral research and beyond.

This was a time when my interest in manifestations of power, violence, and radical equality within social systems was largely separated from my other work.  I chaired (and in some years was the sole member of) Carnegie Mellon’s Political Speakers committee, part of a student organization that spent the school’s money on concerts, festivals, comedians, movies, and the occasional political lecture.  I brought a series of memorable, odd, and sometimes heroic figures to Pittsburgh, including Ashanti Alston, Elaine Brown, Seth Tobocman (who’s ‘You Don’t Have to Fuck People Over to Survive’ had been a profound influence several years earlier), Helen Caldecott, Hunter “Patch” Adams, Brent Mickum, Scott Beiben, The Yes Men, Avi Lewis, Marina Sitrin, and many others.  I worked on consensus process models with our local community bike shop, and helped organize BikeBike!, an annual national conference of community bike programs. 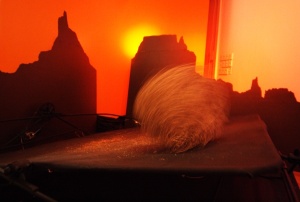 I collaborated with Shaun Slifer broadly during this period – his interests in natural systems, the wild, myths, memory, and histories of violence complemented my own uncomfortable interests in complexity, the history of ideas, and hegemony.  We created two pieces that went to group shows with Rossums, a robotic arts groups I was involved with at the time.  Welcome Home, Pioneer was an interactive kinetic sculpture that explored the limits of modeling and control in the context of agricultural expansion.  Enoch’s Hammer explored the emotional connection between modern surveillance infrastructure and the dis-armed histories held in museum vitrine’s. 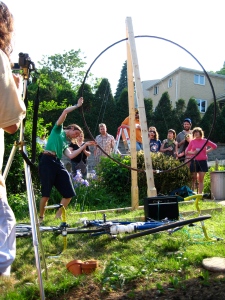 Smaller pieces from this period included the Orphic Brachristochronal Supercollider, an experiment in loop delay pedals and turnbuckles.  Marbles ran inside a hollow metal hoop, suspended from a collapsible wire and pine frame.  A home-built contact mic sensed the hoop’s vibrations which were played through a few pedals to produce good noise.  While fairly successful as an instrument, the OBS lived up to only two thirds of its name.  The big circle with little particles zipping around inside it was certainly a supercollider, and their timed fall around the hoop as it traced a rotating path made a reasonable approximation to the Brachistochrone, but as an Orphic lyre it entirely failed to impress the particular crush I’d had in mind when building it.

Another smaller project from this period was co-organizing the first Roy G. Biv festival with Melissa St. Pierre.  We found grant funding from Pittsburgh’ Sprout Fund to match experimental musicians with kinetic artists who collaborated to build site specific performance pieces.  Most memorable of these for me was Joshua Space‘s collaborative work with Chicago’s DRMWPN, which combined Bryon Gysin’s dream machine with a mandala of rotating reflective umbrellas. 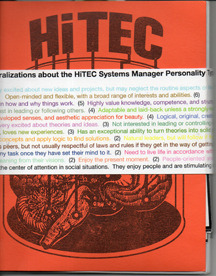 I also began performing with tENTATIVELY a cONVENIENCE‘s HiTEC orchestra, building instruments and contributing to the ‘programming’ that was captured in this book.  I became increasingly interested in the history of western common practice musical composition during this time, and eventually wrote performance software for HiTEC based on ideas around the automatic analysis and generation of tonal music. 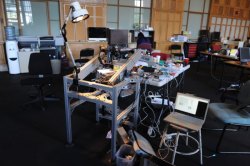 There are many smaller projects without strong documentation from this time – a modified NeuroWave extracted from a StarWars toy, rigged to set off small incendiaries as the user relaxed (the basis for an eventful performance at the Dr. Darker Scratcher Amateur Surgery Show), an inflatable dodecahedron made from mil-spec waterproof Cordura, an eight foot tall unicorn trapper keeper complete with lights and a smoke machine, an inflatable May Day parade float built from polyethylene sheets and scavenged bike frames, a few live VJ performances with Gretchen Niedert, a precision robotic camera stage for the Center for PostNatural History, and too many that I’ve forgotten. 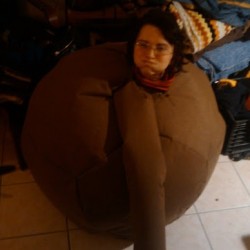 The end of this era began when I met Moxie Marlinspike at a (literally) underground monthly speakeasy I helped run.  It was pretty rare to find a technically competent anarchist in Pittsburgh in those days, especially outside of university circles.  The two of us started inviting interested parties to regular nights at Nico’s Recovery Room, talking about projects in security that might be interesting or able to make an outsize impact.

Eventually Moxie and I decided we wanted to actually build some of the things we’d been talking about, and started to write Barada, an android app that allowed for two-factor authentication using cellphones.  That work got me involved with some of Moxie’s security consulting jobs, where my background in statistics and linear algebra were a strong complement to his expertise in application security.  We also launched the somewhat opaque Institute for Disruptive Studies during this time.

With the release of the G1 Open Source Android device the time seemed right to dive into mobile security more seriously.  In the winter of 2010 we settled on the central thesis behind Whisper Systems, and from there until I moved to San Francisco a year later my time was largely spent either on my thesis research or writing code while trying to keep warm by the wood stove in Moxie’s largely unheated and chronically decaying Pittsburgh mansion.