The first tree.  Recursively generated, branching probability diminishes with distance from root and increases with distance from previous branching.  Each segment has a curvature that propagates to children with random variation, which yields the large looping structures.  Mirror symmetry is enforced.

The second tree.  Generated by a sequence of mutations (rather than parallel mutation, as in a Lindenmayer System).  Structural mutations are assigned a likelihood at every node, and mutations are sampled from this distribution.  The implementation used a nice generalization of the reservoir stream sampling algorithm to a stream with unequal and unnormalized sampling weights.  Mutation likelihood was near zero for any mutation that would have introduced a new segment overlapping an existing segment.

I visited the optometrist a few days ago, and saw some interesting images of the veins in my eyes during the exam.  That got me thinking about the controversial but inspiring work of Adrian Bejan on Constructal Theory.  I wanted a bit more detail about how eye vein growth might be modeled, and eventually found angiogenesis models due to H.A. Levine and Folkman, which provided guidance for the third tree.  Here, the creation of new segments is biased by the gradient of a growth factor enzyme the propagates through a simulated extracellular matrix.  This paper provided most of the inspiration.  I also added an infrequent die-off mutation to the tree structure that removes branches that don’t supply a sink region. 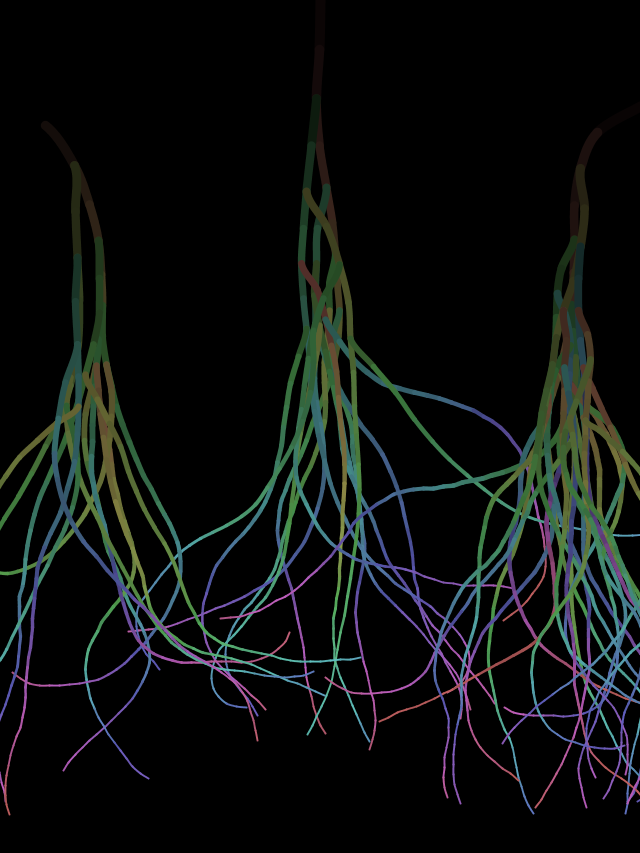 The fourth tree simulates the effects of gravity on the growth of the tree.  The tree grows while gravitational forces alter its structure.  Growth creates additional gravitational stresses, which in turn cause the structure to strengthen the most stressed segments.  Gravitational response in biological trees is particularly interesting to me because of the different responses to stress produced by angiosperms and gymnosperms.  The former, which flower and make fruit, respond to stress by adding wood at the top of branches that’s in tension, pulling the branches up, while for the latter, which make seeds, they add wood to the top of branches in compression, pushing the branches up.

The remaining  tree in this set is inspired by rivers.  I’ve always loved this map of the multiple paths of the Mississippi.  Of particular interest it the sharp transition from meandering to braided rivers.  After reading John McPhee’s ‘The Control of Nature’ I built a river simulation table, which I used to generate these images. 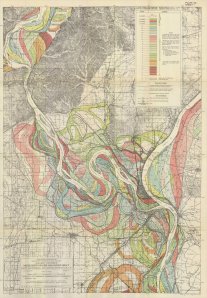